The club has adopted the Caves of Storrs Common and Skirwith Cave under Descents adopt-a-cave scheme..We will report here any conservation work carried out on Storrs Common by BRCC members or possibly any other clubs and cavers.

A Brief Geology and History: 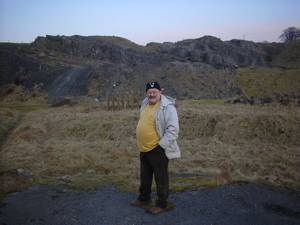 Ged in the quarry, where the steep dip can be seen.

Storrs Common is an open area of land outside the village of Ingleton and lies just inside the boundary of the Yorkshire Dales National Park. The area is formed in the Great Scar Limestone but is separated from the main block by the North Craven Fault. The South Craven Fault forms the boundary on the south western edge of the Common.
The position between the two major faults means the Limestone has been buckled in either direction resulting locally in dips of upto 45degrees in the strata, which is shown on the pictures to the right and below.
The water which resurges from Skirwith Cave flows across the North Craven Fault and across the north of the common before finally plunging over a pretty waterfall in to the River Doe. It is assumed that despite running across limestone the stream doesn’t sink (or partially sink).
To the West the Common plunges down a very steep slope to the river, it is down at river level where the water resurges at Black Rose Rising, it is also possible some water finds its way via an immature bedding to Foss Pool Cave.
To the East, after crossing the Ingleborough track the Common ends at a wall and the land use becomes fields, the next known cave in this block of Limestone is Jenkin Beck Cave. 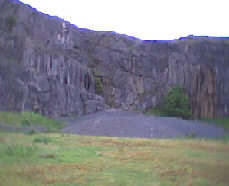 The quarry, tipping and the dip

The common has been actively quarried in the past, small scale operations on either side of and close to the road but a bigger operation resulted in the large Beezley Quarry appearing. Since then the council has used Beezley Quarry for dumping bitumen and chippings etc, see picture, which has unfortunately resulted in the loss of two known caves; the continuation of Long Gour Cave and Quarry Pot.
However, it is the quarrying activities that resulted in places such as Lower Arch Cave, Wood Wizard Cave and Long Gour Cave becoming accessible, so without the quarrying the Common would largely be devoid of speleological interest.

Skiriwth Cave operated as a showcave from the 60s to the 70s, its closure probably being a combination of competition from the nearby White Scar and more importantly nearby quarrying causing movement in the choke (the steps show how much rock has dropped!)

Long Gour Cave received a new slate tile as a cover, the rather heavy object was carried up by Steve and Robbie from Bernies with the intention of being used to cap Lower Arch. Upon arrival they found Ged had already seen to the capping of Lower Arch so it was taken down to provide a new cover for Long Gour Cave. Unfortunately this slate has all but been destroyed by mindless muppets.

Lower Arch Cave has had its upper entrance (shaft) capped, the question of safety was raised about the shaft being open and a slate tile was offered but Ged did an excellent job using metal poles, wood, rocks, sand (of which we have an abundance) and finally covered that with grass to permanently cap the shaft, given time the cap will blend in with the surrounding area and you wouldn’t know it was there. 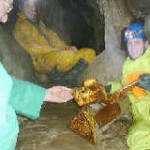 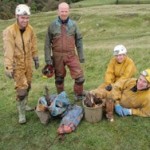 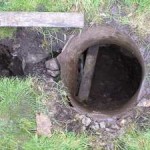 18th January 2003; Dunc, Pete, Adam and Ged went into Skirwith Cave for a short tourist and photo trip, a short distance inside some rusty metal was noticed and this was duly removed on the way out, only a small bit of rubbish but every little bit helps!
There was very little in the way of rubbish so maybe someone else is keeping on top of it, which is good!

28th Feb 2003; Ged, Simon and Adam removed a large quantity of rubbish including 5litre containers from Wood Wizard Cave and other caves nearby and it was buried under at least 2ft of digging spoil from the Wood Wizard dig – a visit later in the year showed that this was slowly grassing over.
A bit more work will be undertaken in this area to clean up Eeltrap at some point in the future – possibly again covered by spoil from the intermittent Wood Wizard dig.

11th October 2009; Lower Arch was inspected but left as digging is restarting here soon. We then moved on to Long Gour Cave where two buckets full of rubbish were removed from near the entrance. The entrance was yet again covered over with a lump of wood and the remains of the large slate.

We then progressed onwards to Skirwith Cave but found it virtually free of rubbish, so we had a tourist jolly instead!

10th September 2011; The previous week Dunc found the entrance of Long Gour Cave to have slumped slightly, so a solo effort by Alex saw him placing some wood in the hole to hopefully hold back some loose material.

If you have any suggestions for conservation work on Storrs Common or in Skirwith Cave then let us know and we’ll look into it, or how about donating some time and lending a hand to help keep the caves in a respectable condition..