A brief history of the Black Rose

The Black Rose is known in two variations; Caving Club & Pothole Club. Below is a brief history of the two.

The Black Rose Pothole Club was active from 1957 and eventually disbanded on December 10th 1960 when they were taken over by the Northern Speleological Group – back then they even had their own hostel (see pic -») at Scar End Farm (it is now posh housing for those with money to spend!) but Ged Dodd who left rather than become NSG later reformed the club for 1976-77 and some finds included the Black Rose Tunnel in Kingsdale Master Cave. Also some caves on Storrs Common were opened up: Long Gour Cave, Lower Arch Cave and a few other minor holes were entered or noted for future reference, before the Club once again disbanded. An article appeared in Descent in 1977 along with a surface map of Storrs Common detailing all the sites of interest. Thanks to Ged for the information of the old days.
Ged’s website The BRPC oldies page contains plenty of information, pictures (old and new) and history of the Black Rose Pothole Club plus details and pictures from their recent yearly reunions, along with other get-togethers and information.

On the 3rd November 2001 a memorable trip took place for Pete & Dunc, in fact a most notable trip that made for hot discussion on uk.rec.caving – the debates and of course playful nature of our posts made for much entertainment. The public nature of the discussion should have made for as much concern as our trip, but obviously the vociferous know-it-alls are (were) held in high regard for some unknown reason so it was deemed acceptable!

By the 17th November, at our trip to Diccan Pot, we had decided to form our own club and had to decide upon a name, owing to our notoriety and given the name of the club we had been suspended from we figured that Black Rose Caving Club was a fine and relevant choice. At the time we didn’t realise that the Pothole Club existed, it took someone else to point it out to us, in an attempt to sway us from our path, but we declared we were a CC and the other club was PC (no, not politically correct, far from it!). In fact other words of wisdom included ‘it takes more than a website to be a club’ – considering the BRCC was built on and has grown from strength to strength on the back of the website it seems our methods have been vindicated. Club membership grew reasonably quickly in the first few months of 2002 as we advertised ourselves to the world (using the internet of course), since then numbers have fluctuated over the years but a strong core always remains. 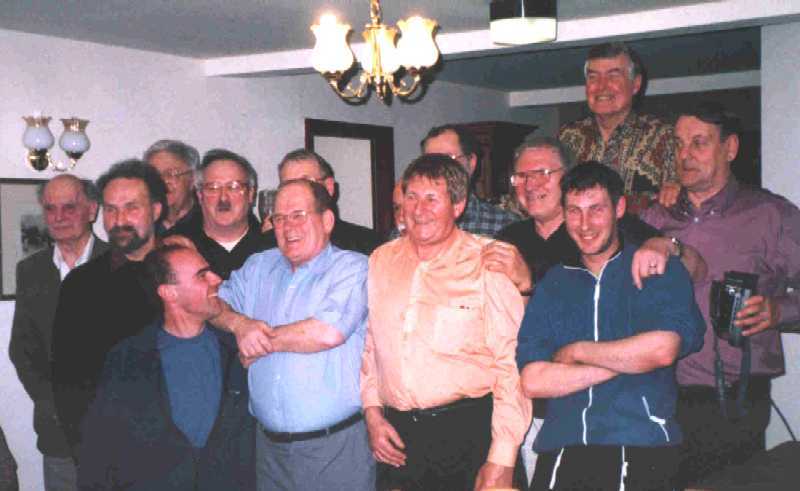 In early 2002 we were contacted by members of the BRPC who were organising a reunion in March of that year at the Marton Arms, we asked a few of them what they thought of us using the Black Rose name and they were happy to see it back in use again (albeit marginally different). It was at this reunion that talk of digging on Storrs emerged – this led to the reopening and extending of Lower Arch Cave, Digger Dog Hole was dug open, Wild Rose Cave was emptied by us and then capped by IMPS and a whole host of other sites of interest were looked at and proddled over the next few years. Results were interesting, although lacking in any significant length.

January 2003 saw the first newsletter produced – regular to start before grinding to a halt, it then became an occasional publication. By winter 2010 we had produced 26 newsletters.

Nearing the end of 2005 the website made its final move, making better use of a hosting package – with this came a marginally more secure members section which was improved with the addition of a forum – we did have one back in the early days but it didn’t last too long – the current forum is well used and provides a useful resource for the members to discuss trips and more besides. The website and internet continue to be used to good effect with numerous documents and library contents available to download – including our extensive survey and rigging topo collection. We also started to use Flickr to store our huge collection of photographs – it serves as an archive, a way of tying photos to the Log Book and a general photo collection for anyone to view.. 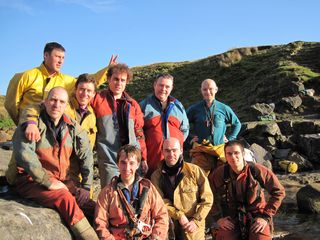 The BRCC 10th Anniversary was celebrated by a fitting trip to Gaping Gill rigging multiple entrances..

November 2011 we reached our first significant milestone, a mere 10 years young! A fair few people thought we’d never make it this far, but somehow we did and of course we had to celebrate..
A meal and of course drinks was planned and took place on the 12th November in Grassington, we stayed at the Black Horse, had a total of nine cavers along with numerous other halves and had a great night! Plenty of food, drink, even a cake and later on singing..
Being a caving club we had to do a trip of some description, much discussion on the forum and a few ideas bounced around beore we finally settled on a Gaping Gill multi-entrance extravaganza. The trip took place on the 19th November 2011 (about as close to 10 years as it gets!!!)
The final list of entrances was; GG Main Shaft, Dihedral, Rat Hole, Corkys and Bar – nine of us headed up to GG with eight heading underground and by some minor miracle managed to rig and derig all entrances without any notable problems.

The BRCC 10th Anniversary was celebrated by a meal, cake and plenty of drinks in Grassington..