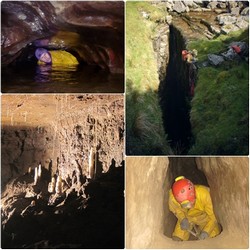 We are a small but fairly active club formed in November 2001 by cavers for cavers. We are based, loosely, in Northern England caving mainly in the Yorkshire Dales but occasionally further afield. We aim to further our members interests in all aspects of the underground world, what we don’t do is become bogged down in unnecessary bureaucracy – we have a constitution to lay down a few simple rules but we do not have a committee as such as we feel there is no need for one to go caving – the club consults all members on any matters arising.
From our very beginnings we have been a very online based club and continue to be so to this day. Most of our members have joined us after having seen the website and most of our news and information is passed to members via the website and the forum. This allows us to keep the running of the club efficient.

When it comes to organising trips we don’t stick to the classics or trade routes all the time as we like to explore the less frequented caves and pots out there, we also explore mines occasionally. If you would like an idea on what we get up to then take a look at the log book for some short notes on every trip we do or visit our dedicated trip reports section for a number of big reports from the past few years.

We are predominantly a sporting club but that does not mean we don’t get involved in exploration too. Members have found new caves in Northumberland, Storrs common and have extended caves in other areas, such as Nidderdale. The club also does a yearly expeditions abroad, our main choice being the Matienzo Expedition in Spain.

A few of our members have an interest in underground photography and a significant quantity of these photos are held on our caving-trip photo archive on Flickr, which can be viewed via our gallery.